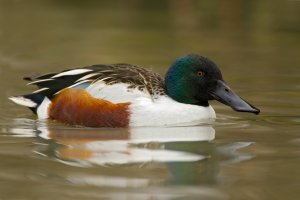 If the Northern Shoveler’s bill doesn’t catch your eye, the male’s blocky colors sure will, with its bright white chest, rusty sides, and green head it’s hard to miss. The female is no less interesting with a giant orange bill and mottled brown plumage. Thanks to its large spoon-shaped bill the Northern Shoveler might be the most outwardly distinctive of the dabbling ducks. Its uniquely shaped bill measures about 2.5 inches long and is shaped like a shovel, hence its common name “Shoveler”. That’s not all, this odd-shaped bill also has about 110 fine comb-like projections called lamellae along the edges that act like a colander, filtering out tiny crustaceans, seeds, and aquatic invertebrates from the water. Northern Shovelers are monogamous and remain together longer than pairs of most other dabbling ducks. They form bonds over the winter and stay together until just before fall migration. Northern Shovelers can be found all over the world including America and across Europe. They spend the winter throughout Europe, Africa, and India. Look around the edge of shallow areas for groups of ducks with their heads down foraging intently. They tend to use more stagnant pools of water than other ducks, so you may also find them in smaller, murkier pools of water such as marshes.