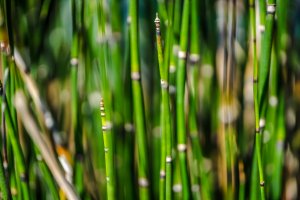 Spend any time on the trails in the Metroparks and you have probably seen this plant. A “living fossil” horsetail is related to large, tree-like plants that thrived 400 million years ago during the Paleozoic era. A close relative of the fern, horsetail is a nonflowering plant found in every county in Michigan. Like ferns, horsetails do not produce flowers or seeds. This species reproduces by spores and more commonly by creeping rhizomes and tubers. Horsetails have hollow stems and shoots that look like asparagus when first growing. As the plant dries, silica crystals that form in the stems and branches look like feathery tails and give the plant a scratching effect, this gives horsetail one of its common names, scouring rush. These plants were used historically for cleaning and shining metal surfaces. Snake grass, meadow pine, green foxtail rush, bottlebrush, and horse pipes are other common names for horsetail. Each year, horsetail produces two types of shoots: fertile and sterile. The fertile or reproductive stems, which resemble asparagus are short-lived and die back to the ground after spores are produced. Afterwards, the sterile stems emerge, with numerous joints along each stem. At each joint, numerous whorls of slender branches are produced giving the plant a bushy appearance.