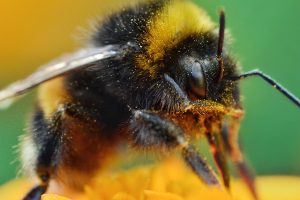 “Give me spots on my apples. But leave me the birds and the bees, please.” –Joni Mitchell

Maybe you have heard the song, Big Yellow Taxi. It’s a catchy tune that’s been sung by several artists and has a chorus about paving paradise. Its lyric about DDT particularly comes to mind this month, as National Pollinator Week happens to occur in June.   “National Pollinator Week is a time to celebrate pollinators and spread the word about what you can do to protect them,” according to pollinator.org.

Though the non-native honeybee gets a lot of credit for their work on the flowers, in the Great Lakes area the true powerhouse pollinators are bumblebees.  Blueberries, tomatoes, eggplants, cranberries, potatoes, peppers —just a few of the many crops that require bumblebees to produce fruit.  They rely on a special type of pollination called “buzz pollination” which honeybees just can’t do, but that bumble bees specialize in.

So, what do apple spots and DDT have to do with these pollinators?  Though DDT is now banned, other insect-killing pesticides have been used for years to increase crop production and eliminate harmless but unsightly defects on fruits and vegetables.  Pesticides are also mass-marketed to kill insects of all kinds around the home and lawn. Unfortunately, we are now learning what a high cost has been paid for the use of these poisons by both commercial growers and home gardeners alike.  Insect pollinators are disappearing.

In fact, in 2017 the rusty patched bumble bee (Bombus affinis) earned the dubious distinction of becoming the first bee in the continental United States to be declared an endangered species.  It is now extinct in our state.  And according to research by Michigan State University, half of Michigan’s remaining bumble bee species populations have recently declined by 50% or more.

What can you do to help protect pollinators?  Some simple changes can make a big difference.  You can choose organic produce that is grown without pesticides.  You can use natural alternatives to avoid spraying chemicals around your home.  And you can visit your closest Metroparks nature center to learn more about habitats that support those song-worthy birds and bees.