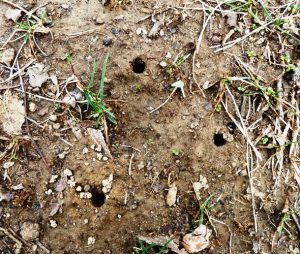 When I mention “field of bees,” what image comes to mind? Do you see a spring field bursting with clover and daisies, the hum of fuzzy, industrious honey bees filling the air? It’s a beautiful image, but it’s decidedly… new. All of these wonderful flowers and honeybees, though mostly naturalized now, came to North America in the last several hundred years, brought by farmers from overseas.

If you want to experience a native Michigan field of bees, head down to the “Flat Iron” at Oakwoods Metropark. It’s a low, broad expanse of sandy soil that ever-so-gently slopes up from the Huron River behind the nature center. Step out onto it on a sunny day and you’ll sense a buzzing around your ankles. Look down and notice the dozens to hundreds of small bees buzzing about a few inches off the ground. Crouch down and you’ll spy just as many small holes disappearing into the soil, each the diameter of a pencil, and crawling into and out of each one you might spot a single bee. A native Michigan bee. An andrenid bee. 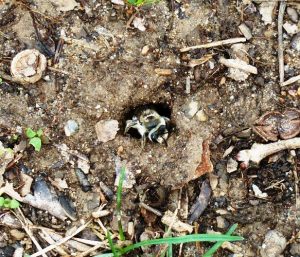 But don’t worry about stings. Unless you grab ’em, andrenid bees (also known as miner bees due to their digging habits) have a gentle nature. Get too close to a honeybee nest and the guard bees might attack. It’s their job to defend the hive. Andrenid bees have no communal hive to defend. They’re solitary little one-woman shows, with each mother bee digging her own underground chamber, filling it with the pollen and nectar that she gathers herself, and laying her own tiny egg in it that will hatch out and grow up into next year’s andrenid bee. As the whole field of little holes will attest to, they do seem to enjoy living near each other, but each bee still does its own work and maintains its own abode. It’s more “apartment complex” than “extended family home.”

The only riches these miner bees find are the golden pollen and sweet nectar they stuff into their “mine” as food for their developing larvae. But the riches they share with us are almost beyond counting. Along with our other native bees, these little insects pollinate countless native flowers that grow into literally billions of native fruits. As we hear about honeybee hives lingering under the threat of collapse, let’s take a moment to give a hats-off to the andrenid bees and the other 450-or-so species of native bee that help keep the Michigan flowers blooming and our Michigan fruits ripening! 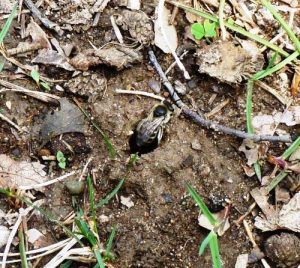 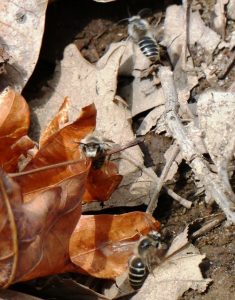