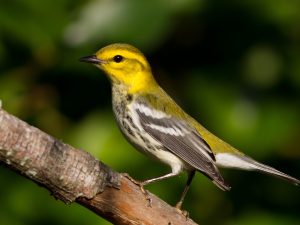 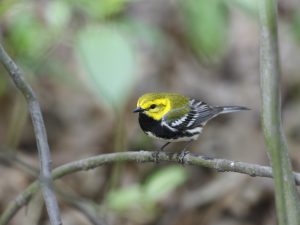 May is an exciting time in Michigan. Harsh cold snaps have finally given way to sunnier days and lush green backdrops have replaced the emptiness left after months of cold snow. For birders though, the wonder of May lies in the fact that it is peak migration season for many songbirds. Among those is the Black-throated Green Warbler, a small bird whose plumage is more yellow than green at first look. If you’re interested in spotting them, make sure too keep an eye out for their bright yellow faces, white underbelly and subtle olive hood and cheeks. The males carry the distinctive black splotch across their throats, but both sexes show black banding across their backs and wings. In Southeast Michigan they can be seen first in late April and early May, and then again in late August through early October for the fall migration. If you’re traveling through western or northern Michigan though, you may be lucky enough to see one during the summer months in their breeding territories. Their preferred nesting sites are in tall conifers, but they may be seen in mixed woodlands during this time as well. While migrating, they are decidedly less picky in where they land as they work to keep their small bodies nourished through the long flight at hand. Most of the warbler’s diet consists of insects, which they will eat off foliage and shrubs, but they are just as apt at hunting straight out of the air. This savvy tactic is known as “hawking”. Like most small birds, they are often heard before they are seen and can be identified by their cheerful “zee-zee-zee-zoo-zee!” call. When they are alarmed, often they will add a buzz to their normally clear high whistle, giving them a slightly alien sound. Birders in-the-know keep a lookout at Kensington and Stony Creek, but nearly any Metropark will do to spot this lemon-hued spring songstress!