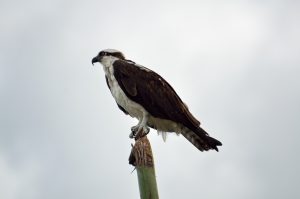 As we transition from winter to spring, many migratory birds are flying north to call Michigan their summer home, among these birds are Osprey. During the last two weeks of March, telephone poles, cell phone towers and light posts will begin to serve as perching spots for these unique birds of prey (right).

Travelling from as far as South America, Ospreys come to Michigan to breed when they are two years old. They spend their entire first year in their southern wintering ranges. When they’re ready to give parenting a try they will head north. The males will arrive to the nesting site first and the females will arrive shortly after. First year parents make an attempt at building a nest, but do not breed. When the pair returns to the same nesting site as second year parents, putting them at three years old, they will breed. Ospreys like to nest in tall, platform-like structures like the tops of trees, large forked branches or ledges. They may even build their nests on electric towers, siren towers or on the poles of parking lot lights. They prefer a spot by water and with good visibility in all directions (lower left). 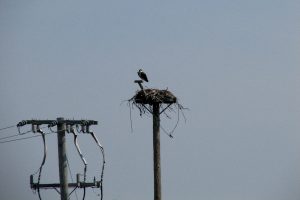 Ospreys are the only hawks in North American that eat strictly fish, and they are good anglers too! One out of four hunts result in a captured fish. When Ospreys are hunting for their next meal it takes them on average twelve minutes to do so. Once they have located their prey, they will dive with their feet outstretched in front them (lower right). Their 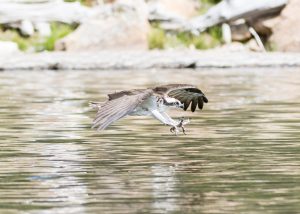 Osprey diving for a fish

talons are curved like fishing hooks and the pads on their feet are similar in texture to sandpaper. They also possess a reversible outer toe that helps them grab their prey with two toes in front and two behind. This combination of physical characteristics allows the Osprey to grab a fish without it slipping away. As an Osprey flies with its prey, it will adjust the fish headfirst so that it is more streamlined and lower the wind resistance while flying.

Look for these awesome birds of prey by open water or wetlands at one of the Metroparks this spring and summer!