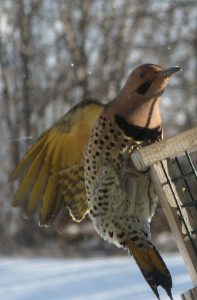 Northern Flicker with yellow coloring to its wings.

The Northern Flicker is only one of eight species of woodpecker in Michigan, and its looks and behavior are unique among the rest. From the tip of the beak to the tip of the tail, the Northern Flicker measures at 12 inches, falling second behind the Pileated Woodpecker, who reaches a length of 19 inches! Their light brown bodies are covered in black, scalloped shaped spots. A black crescent, resembling the shape of a bib, sits just above the breast of the bird. Light gray covers the back of the head and a red chevron adorns the nape. If all those markings weren’t cool enough, these birds have an extra pop of color in their wings when they fly. Northern Flickers found in the eastern U.S. will have a yellow coloring to their wings (left). Flickers found in the western U.S. will have a red coloring in their wings. 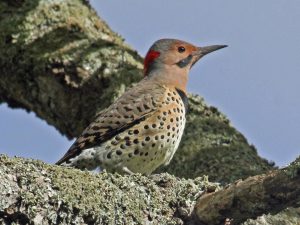 These woodpeckers are sexually dimorphic, meaning that the males and females look different from one another. Luckily for us, they make it easy to tell them apart. All you have to do is look at their face! Males have a black moustache running from their beak all the way to edge of their cheek (right), and females lack a moustache (lower left).

While these woodpeckers spend their time climbing trees, they are commonly found on the ground foraging for insects like ants and beetles. They use their chisel-like beak to dig the ground and lap up their meal with their long, barbed tongue. This feeding behavior is uncommon among other Michigan woodpecker species. Another interesting trait of Northern Flickers is that they migrate. Southeast Michigan is part of their year-round range, however, Northern Flickers that live in the most northern parts of their range will head further south for the winter. 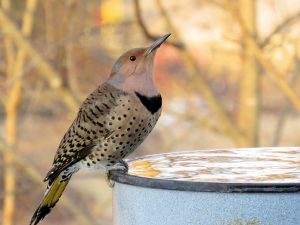 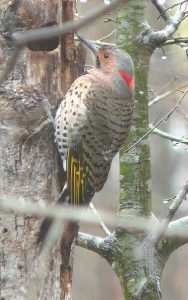 Due to their active behavior and loud calls they are easy to find. They are the most active and vocal during the breeding season. Males of other woodpecker species will use drumming, the rapid hitting of a resonant surface with its beak, to attract females. This isn’t the case with male Northern Flickers, while drumming is a part of their courtship behavior, they attract females to a nesting site by mostly using calls instead. Its distinct “kekeke” call can be heard from long distances. Once a male and female become a pair, they will work together to excavate a hole in a dead tree where the nest will be located. Check the edges of trails or potential nesting sites for Northern Flickers during your next trip to the Metroparks!