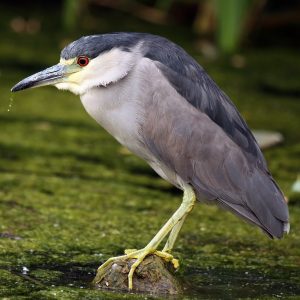 As their name suggests, the Black-crowned Night-Heron does most of its hunting at night. Although they are common in the wetlands of Michigan they are not seen as often as other herons such as the Great Blue Heron who hunts during the day. During the day, the Black-crowned Night-Heron roosts in group nests that may consist of other bird species like other herons and egrets. Towards dusk the heron will leave the roost and head towards the edges of water where their short legs and stocky body help them sneak along the plant material to find prey. Eating anything from plants to insects, leeches, clams, crayfish, fish, reptiles, and amphibians the small Black-crowned Night-heron takes the night shift in the wetlands to avoid competition with their larger counterparts. Their striking appearance, with their white chest, black crown, and white plumes off the back of their head make them an exciting bird to spot on the marshy edges in the Metroparks. When walking through the parks close to water at dusk listen for their squawks and clucks that almost sound like barking. You can listen to them here: https://www.allaboutbirds.org/guide/Black-crowned_Night-Heron/sounds.