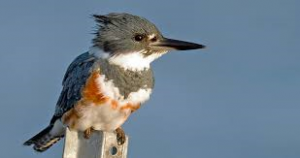 The Belted Kingfisher is often first noticed by its rattling call as it flies over rivers or lakes. It may be seen perched on a high branch, or hovering over the water rapidly beating its wings, then plunging in headfirst to grab a fish. This bird can be found throughout the Metroparks near water. The Belted Kingfisher is one of the only birds where the female is more brightly colored than the male. Both sexes have a blue band across the breast, but the female has an extra rust colored band as well. As the name suggests, kingfisher mostly eat fish, but will also feed on crayfish, frogs, tadpoles, and aquatic insects. Kingfishers usually nest in a burrow on the bank of a lake or river. Both the male and the female help in excavating a horizontal tunnel, three to six feet long with a nest chamber at the end. Click the following link to hear the Belted Kingfisher’s rattle like call: https://www.bird-sounds.net/belted-kingfisher/