During the silvery-white winter season, the deciduous trees stand skeletal, having lost their leaves of red, orange, and yellow. This is the season in which the forest conifers stand out in shades of green. The beautiful needles of one conifer are a real eye-catcher: the Colorado Blue Spruce. This ornamental evergreen is popular in home gardens, backyards, and parks for its silver-blue coloration, symmetrical shape, sturdy root system and limited shedding, making it a favorable tree for the holidays. Since it is such a popular tree for landscaping it is one of the most widely planted trees around the United States, even though they are not native to the Great Lakes region.

The Colorado Blue Spruce, also known as the blue spruce, is a member of the Pine family and is native to the Rocky 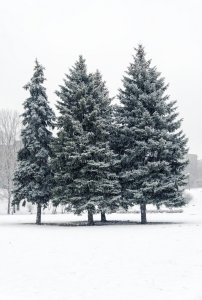 Mountain region of North America. It was first discovered in 1862 by botanist C.C. Parry on the top of Pikes Peak in Colorado. It is a slow-growing and long-lived tree that can reach an age of 600 years and range from 50 – 70 feet tall; about as tall as a five-story building. You can find these trees in many different settings as they can survive well in a variety of soil types.

No matter where the blue spruce is found, it and other conifers in general can benefit the habitats and ecosystems around them. Since conifers hold on to their leaves all year round, they can output oxygen throughout the winter season, unlike deciduous trees. As well as oxygen production, conifers regularly benefit our winter wildlife such as: rabbits, skunks, opossums, and birds. Their low-to-the-ground branches provide safe spaces for animals to hide from predators as well as create warmer areas to block out the cold winter weather. With its deep and wide spreading root system the blue spruce stands strong against the wind, providing sturdy shelter for our winter animals here in Michigan.

Over time, the Colorado Blue Spruce has become a very common tree in Michigan and in this case, has been beneficial to habitats in our state. However, it is important to remember that some introduced species can have negative effects on habitats and become invasive. Meaning, they out-compete native plants (or animals) for the same space and resources that native species need to survive. If you are looking to plant trees in your yard or neighborhood, be conscious of which species are native and will be a benefit to the wildlife around you. That way we all, animals and humans together, can enjoy and benefit from the land around us.