This week’s Wildlife Wednesday animal feature is Michigan’s only venomous snake, the Eastern Massasauga Rattlesnake (or EMR for short)! Like other rattlesnakes, the EMR can be identified by its distinct spade-shaped head and button-like rattle at the tip of the tail, which it shakes to warn predators. It can grow to about 2 feet long and is grey or light brown with large dark brown splotches on the back that mildly resemble an X-box controller and smaller markings on the sides. 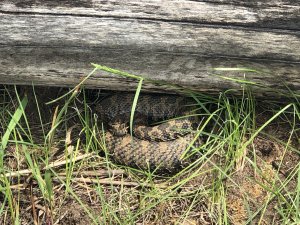 Throughout the Great Lakes region, the EMR lives in and relies on wetland habitats such as marshes, wet prairies and areas along lakes and rivers. Found throughout the lower peninsula of Michigan, the shy nature of this snake means sightings are a rare treat! Although the Eastern Massasauga (pronounced mass-a-saw-ga) is venomous, this snake is typically secretive and docile and will usually only bite a human if cornered or threatened. However, if you hear a rattle or see this snake, be sure to give it plenty of space and leave it alone as a bite will make you very sick. We are too big to be considered food; biting a human would deplete the snake of the venom it needs to kill its prey, which include small animals like mice, voles, frogs and snakes. As the weather warms, the rattlesnake moves to nearby upland areas, such as prairies, to hunt. This snake plays an important role in controlling rodent populations, which can help reduce property destruction and infestation in homes and other building. 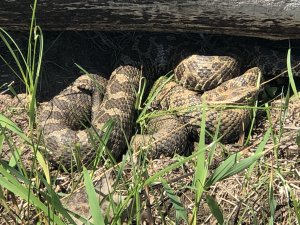 The Eastern Massasauga is a federally threatened species due to declining numbers from habitat loss and human eradication out of fear of venomous snakes. This snake, and many other native animal species, relies on healthy wetlands to survive. An estimated 50% of historic Michigan wetlands have been lost, but there’s still time to protect what remains. Small changes such as using a reusable water bottle, buying food from local farms, or reducing or eliminating the use of fertilizers, herbicides, and insecticides can collectively make a large impact in protecting critical habitat for our native plants and animals. To learn more about how you can become an environmental steward at home, visit: https://miwaterstewardship.org/.

To report an Eastern Massasauga Rattlesnake sighting within your Metroparks, please call the nature center within that park (visit www.metroparks.com for center phone numbers). You can also report a sighting by searching Eastern Massasauga Rattlesnake at www.michigan.gov/dnr. To learn more about this amazing reptile, visit https://www.fws.gov/midwest/endangered/reptiles/eama/index.html