Large amounts of snow can mean lots of things for many different people. For outdoor enthusiasts a snowy season offers opportunities for snow shoeing, skiing, or ice fishing. For children and adults that are still kids at heart, a snowy season might mean hours in the cold, building forts or snowmen, sledding, or epic snowball fights. For others, they would rather be anywhere else, without a single snowflake in sight. Regardless of whether you smile or scowl at the sight of snow, there is one thing we all have in common: we can agree that surviving under the snow all winter long would be challenging, if not impossible, for us! But many of Michigan’s smallest mammals spend their winters not just surviving but thriving under the snow. 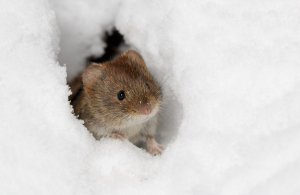 In Michigan, there are several mammal species that utilize the cover and protection of our winter snow. Mammals such as chipmunks, voles, and shrews could spend all winter long under the snow if conditions permitted. These furry friends live their snowy winters in the subnivean zone. “Sub” means below and “nives” is Latin for snow. Combine the two together, and you get “below the snow”. Subnivean zones are pockets of hollow space between the top layer of snow and ground. Even though subnivean zones sound inhospitable, the snow acts as insulation, keeping frigid temperatures and gusty winds out while maintaining the subnivean zones at or above 32 degrees Fahrenheit or 0 degrees Celsius.

Subnivean zones form in several ways. One way is when snow first falls near plants or rocks, there are spaces protected from the snow. Eventually, once the snow reaches a branch or the top of a rock, the space initially protected becomes a hollow cavity. Another way that these zones are formed is when snow accumulates on the ground. Once enough snow has accumulated, the layer closest to the ground begins to melt and will evaporate, traveling up through the other layers of snow leaving behind a hollow space.

For humans surviving in an area maintained at 32 degrees Fahrenheit all winter would be difficult. Chipmunks, voles, shrews, and others stay quite comfortable with their thicker winter coats of fur as well as the higher levels of fat that remain on their bodies. These mammals also create different chambers connected by a system of tunnels in the subnivean zone. The chambers have different designated uses, from sleeping to food storage. Think of a miniature city beneath the snow, complete with homes and interconnecting streets that lead to shelter and food.

The whole system of tunnels also protects the animals that dwell there from predators such as foxes and owls. Foxes and owls rely heavily on sight to capture their prey. A thick layer of snow between the prey and their potential predators is an effective form of protection. However, if a chipmunk or vole is too noisy in their tunnels or chambers, these predators can use their excellent hearing to detect the prey through the many layers, swooping or jumping straight down to the source of the noise. Even in these situations, mammals that use the subnivean zone maintain tunnels specifically for escape from their predators. 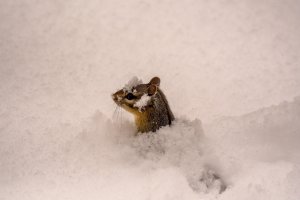 With less and less snow falling in the past winters or snow accumulation melting days or weeks after arriving, subnivean zones in Southeast Michigan are diminishing. Without subnivean zones to rely on, small mammals will be more exposed to predators and have little to no insulation from the blasting cold all winter long. Thankfully we have the power to help out our fellow mammals even with no snow. By leaving dead logs and leaf litter available all winter instead of clearing them out by the end of autumn, we can offer shelter or some protection from the cold temperatures and blustering winds for our furry friends. Leaving stalks and stems, especially of native plants that have seed heads for winter food, can help shelter and feed both small mammals and birds no matter the weather.

This winter let’s hope for some heavy snowfall for the chipmunks, voles, shrews, and other small mammals of Michigan. Look for signs of this unique winter world on warm days, the tunnels become visible as the upper layers of snow melt away.