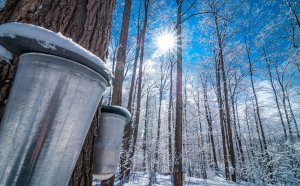 To some, the end of winter signals the arrival of migrating birds. Or perhaps the awakening of reptiles, amphibians, and some mammals from hibernation. And to others, it means the blooming of flowers. But there’s a special spot at the tail end of winter that makes many happy. Because in late February, it is the arrival of maple sugar season.  Throughout this shortened time, the Huron-Clinton Metroparks is proud to offer programs that demonstrate this centuries-old tradition. But let’s explore three facets of maple sugaring. Let’s look at the history of sugaring, the science behind it, and the effects of climate change of the maple sugaring season.

There are several legends on how different Native American tribes discovered the delicious nature of maple. One of the most popular is an Iroquois story about a chief named Woksis, who took his tomahawk out of a tree to go hunting. His wife later collected the water that flowed from the gash in the tree for cooking. The pair enjoyed a great dinner complimented by the sweet, smoky maple syrup. Regardless of the origin story, many tribes in the northern regions were putting gashes in the maple trees to collect sap which would then be cooked down into syrup and sugar. Solid maple sugar was easier to store and trade than liquid syrup and archaeologists have found evidence of maple sugar in artifacts even from Southeastern tribes.  When Europeans arrived in the region, they traded goods for this new, sweet sugar. The Europeans also gave tribes metal pots, pans, and more, which reduced the time to cook maple sap into sugar.  Over the years, maple sugar and syrup production has been aided by the rise of mechanization and automation. According to the Michigan Maple Syrup Association (MMSA), there are currently over a hundred licensed sugarbushes, or maple syrup producers, in Michigan.

The Science of Sugaring

Many people know the delicious taste of maple, but do you know the science behind the flavor? In late winter, generally, the temperatures are above freezing during the day (32° F) and below freezing at night. In the trees, frozen sap thaws and begins to flow into the branches. At night, sap will travel back into roots to be stored for the future. By drilling or tapping a small hole in a maple tree and fixing a spile, the special tap that allows the sap to flow out into a container, maple sap can be collected for boiling. Syrup can be made from other trees, too, like birch and sycamore, but maple syrup remains the most popular. The sugar content in the Sugar Maple (Acer saccharum) sap is about 2%, which makes it the most prized for maple syrup.  Boiling sap into syrup is, in culinary terms, a reduction. The water in the sap gets heated and changes from liquid to gas, specifically water vapor. Once the sugar content of the liquid is 66%, it is now maple syrup.  Sugarbushes will use a hydrometer to test the liquid, which uses buoyancy to test the density of the syrup.  If the hydrometer floats at the 66 Brix (1 brix equals 1 degree of sugar content) mark, it is syrup and can be cooled and stored for enjoyment. Maple syrup is a natural source of sucrose and is free of any additives or artificial sweeteners.  If stored in a cool, dark place, maple syrup can be enjoyed for over a year after it was produced.

The Effects of Climate Change on Maple Syrup

Unseasonably warm weather can be potentially catastrophic for maple syrup producers. Under normal winter conditions, sap is stored frozen in the roots of a maple tree, where it gets nutrients from the soil. If temperatures rise above freezing, sap begins flowing to the branches. If temperatures remain above freezing, or rise too high, trees will begin forming buds and leaves and use the sugar-rich sap to do so. Typically, the perfect maple syrup conditions start as the daytime temperatures climb above freezing and the nighttime temperatures sink back into the freezing. This might happen in late February or early March, and last a couple of weeks if conditions are good. But with winters in the Great Lakes having periods of warmer weather earlier and earlier in the year, the impact can be a shortened season and/or an inferior product. Long-term consequences of climate change could mean fewer areas where maple syrup can be produced, or even fewer suitable trees to harvest from- sugar maples only thrive in regions with four-season climates and plenty of rainfall. Responsible maple syrup producers, upon choosing trees, make sure to drill holes in different spots each year, or even stop tapping certain trees to allow the tree to heal from the holes and continue in its normal growth. With fewer trees and regions to harvest from, maple syrup products might become scarcer to find and costs will rise.  Maple syrup producers are always looking for ways to fight the effects of climate change. Over the years, sap collection has improved in its reliability and producers are able to diversify the maples used for maple syrup. As previously mentioned, the sugar maple has the most sugar content, but every species of maple can be used to make syrup.

If you’re interested in more about maple syrup production at your Metroparks, visit us throughout the month of March at Kensington, Oakwoods, Stony Creek, and Wolcott Mill Metropark.