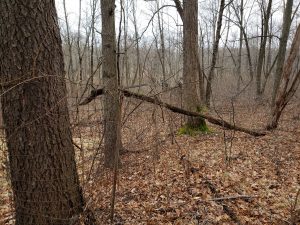 The Hodges family fence stands along the Lake Head Trail as a silent reminder of our past.

How’d things go for you today?
Don’t you miss them
Since they had to go home and stay?
And I’ll bet you dread to spend
Another lonely day with me
But lonely fence, I’ll keep you company”

I may not have the good looks and silvery voice of Faron Young, (ok, maybe not the most relevant reference but work with me) but I hope I’ve caught your attention for the next few minutes. Then, you can get back to binging Netflix and wondering how you’re going to survive sitting on your couch for the next few weeks.

Why a fence? Surely, I could have written a story about something else. Maybe a story about the eagles that make our park their home or the triumphant return of the beaver, but this fence is quite special to me. It’s not here to keep anything in or out, it’s not marking any boundary or built in spite by quarreling neighbors. It stands here as a silent reminder. A monument if you will, to the One Hundred Twenty-Four who made a sacrifice for our future.

It was 1957, and Faron Young was one of the most famous country singers on the radio (see, relevant after all). The Huron-Clinton Metropolitan Authority was in its tender years (that’s my last song reference, I swear) and was quickly buying up land to create public parks. The Authority had its eyes on a bit of land on the border of Oakland and Macomb counties. It was mostly poor farmland with a trickling creek rolling through its hills, dotted with trees and swamps and home to One Hundred Twenty-Four families.

Now it’s important to know that in that time there were very few places for anyone to go and be in nature. Most recreation areas were owned by private clubs to keep out those who were not excessively wealthy. The local swimming holes were overly crowded on hot summer days, and the grand National Parks were so far from Michiganders, that most could only dream about going. Only a few public parks were in existence and most people did not have the ability to “get out and play” as we like to say. So, the Metroparks purchased the land from those One Hundred Twenty-Four through eminent domain for the benefit of all. The homes were removed, a set of dams constructed, and the new Stony Creek Metropark was officially opened. As Paul Harvey would say, “and now you know the rest of the story.”

This humble fence, frozen in time and draped in vines stands as a reminder. When you walk these trails remember that all those years ago, people cared about you, enough so that they gave up their homes so that their backyards would become your backyard. After all, They’re your Metroparks.