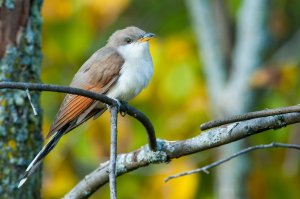 Did you know there are two species of cuckoo that summer right here in Michigan? Pictured is the Yellow-billed cuckoo!

This long, slender, bird is about the size of a Blue Jay and is mostly light brown, with rusty red wing patches that are visible in flight, a long tail, with large white patches on the underside, a skinny, curved yellow beak, and can often be seen in a hunchbacked position when perched to hide its bright white chest.

These birds are some of the only eaters of hairy caterpillars, even being able to eat up to 100 in one sitting. They remove most of the hairs by shaking or rolling the caterpillars in their beak or by rubbing the caterpillar on a rough surface. When their stomach lining becomes matted with hairs, they are able to shed this lining and regurgitate it back out, hairs and all.

While they are cuckoos, these birds do not necessarily leave their eggs in the nests of other birds as the Common Cuckoo of Eurasia does and for which the behavior is famous. Yellow-billed cuckoos will only do it when food supplies are low or other nesting reasons make them unable to incubate their eggs and raise their own young. They have been known to leave eggs in the nests of Black-billed cuckoos, American Robins, Gray Catbirds, and Wood Thrushes.

Yellow-billed Cuckoos can be found throughout the summer in many of your Metroparks, anywhere there are large swatches of deciduous forests. The best place to see them are in forest clearings and canopy openings. Make sure to catch them before they head to South America for the winter!