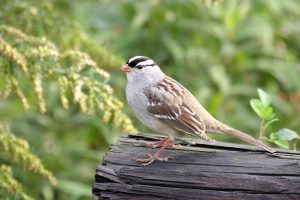 While many birds are leaving Michigan in the fall to head for warmer wintering grounds down south, two of our most handsomely marked sparrows are moving in from even farther north. White-crowned and White-throated Sparrows are both relatively large songbirds with boldly black-and-white patterned heads that are common across backyards and parks during the spring and autumn months in southeast Michigan. The White-crowned can be distinguished from its close relative by its more grayish overall appearance, its pale orange bill, and its lack of two features found on the White-throated Sparrow. The White-throated is easily identified by the namesake white throat patch and yellow marks above the eyes. The White-crowned comes from further north, nesting in Alaska and northern Canada, and is often only around for a brief stopover during migration with peak numbers in April and October. Both sparrows feed in groups on seeds and berries on or near the ground and will readily come to feed on spilled seeds beneath a backyard birdfeeder. You can increase your likelihood of seeing these birds in your own yard by placing feeders within a short flight from bushes or brush piles for cover. When foraging, they use a characteristic “double-scratching” method which involves a sliding hop backwards to remove leaf litter or dirt followed by a quick forward hop within the same motion to land back where they started. White-crowned Sparrows aren’t born knowing their song, they learn it within the first few months of their life by listening to adults. As a result of this, they have regional dialects across the country and have been the subject of many research studies on bird songs.