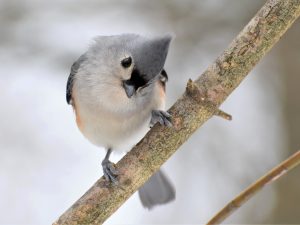 The Tufted Titmouse is a bird you may have seen come and go from your bird feeder. During the warmer months its diet is mostly insects. This species’ range is moving further North and the titmouse can now be found year-round in Southern Michigan. What makes the Tufted Titmouse stand out is their pointed crest (like a Cardinal, but smaller) and the dark black patch above their stout dark bill. Their back is a silvery gray, while their chest is white with some peach on the sides. The Tufted Titmouse is easily recognizable through its song which sounds like, “peter – peter – peter”. To learn about what the Tufted Titmouse likes to eat from feeders, visit Project FeederWatch.