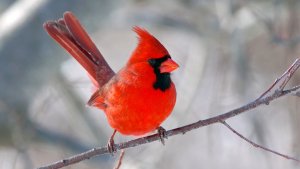 This beautiful red bird is a year-round resident here in Michigan and a common and easily identified sight among our neighborhoods. The Northern Cardinal wasn’t always a back-yard songbird here in our state. In fact, it wasn’t a common bird in the Lower Peninsula until an increasing trend from the 1960s through the 1990s. Today this bird is plentiful in the southern Lower Peninsula, often seen in the northern Lower Peninsula, and scarce in the Upper Peninsula. The increase in population in our state is largely due to an increase in habitat. Cardinals prefer woodland edges, thickets, suburban gardens, and towns. The availability of these habitats has increased due to the ongoing land development in the Lower Peninsula. Now that these birds are a regular staple in our suburban backyards we can more easily observe their unique behaviors. After a long winter, the pairs come back together and reaffirm their pairing before mating. They will feed each other and sing songs together to strengthen their bond. The female Northern Cardinal is one of few female songbirds in North America that can sing and often sings longer and more complex songs than the male. If you have a bird feeder filled with black oil sunflower seeds you are almost guaranteed to have a Northern Cardinal visit you. Be sure to keep a look out for their unique mating rituals at your feeder. Happy Birding!