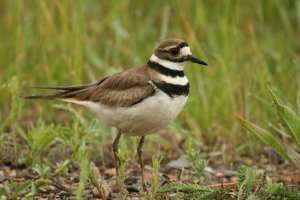 This quick-stepping, lawn-loving shorebird seems to be full of contradictions. While most members of the plover family spend their time on Michigan’s beaches and shorelines, making laying eggs and raising young in the sand, the Killdeer can most easily be found around here in large, mowed backyards, open fields, and pastures.

Killdeer breed in these areas, making nests on the ground in pairs by digging small recesses in the dirt. Once the eggs are laid, both the male and female collect grass, pebbles, and small twigs to surround them. Parent Killdeer will evaluate threats and act quickly to protect their young, since nests are usually in open areas with little cover. These protective moms and dads will rush out toward a predator and then start acting as though they have a broken wing. This “broken-wing display” or “injury feigning” gets the attention of any approaching predators and then the faking Killdeer leads the threat away from the young. Multiple other species of bird do this, so if you ever see a bird with a broken wing running away from you on the ground anytime you get close, there’s probably a nest nearby! However, this does not stop non-predator animals such as cows from stomping on nests and eggs, which is a constant threat to Killdeer who frequently want to nest in open, short cut pastures.

Killdeer choose this dangerous living space because their food is abundant and easy to find. Feeding mainly on insects, these intelligent birds have been seen following field plows, quickly plucking up any grubs or earthworms that get upturned in the process.

So, whether in your own freshly manicured backyard or in one of your Metroparks’ many open fields, be sure to look for the Killdeer in all it’s contradictory glory!