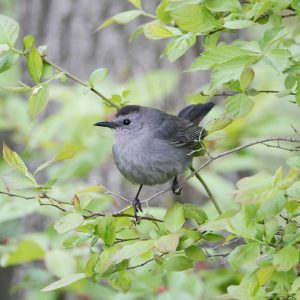 If you hear a raspy meowing from a tree along the nature trail, think “bird”, not “cat”! You’ve probably just heard the call of the Gray Catbird. Its feathers are a uniform slate gray, with a rust-colored patch under its tail, but it is most well-known for its “meowing” call. Lucky observers might see it bobbing its long tail while it forages for insects. Catbirds are good parents. Their nest is tucked away in brambles, shrubs and thorny thickets, hopefully safe from predators. The female is so loyal to her nest that she often identifies eggs from the Brown Cowbird (a parasitic species who sneaks eggs into the nests of others) and dumps them quickly to keep her own young safe. Catbird parents are such diligent nest-defenders that birds like warblers and sparrows in neighboring nests often see the benefit of increased success, too. Despite this “neighborhood watch”, in one study by the Smithsonian Migratory Bird Center, nearly half of Gray Catbird fledglings fell victim to free-roaming house cats. People can keep birds safe by keeping cats in the house and allowing the only “meowing” in nature to come from the amazing Gray Catbird!