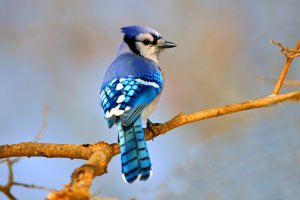 Whether you hear a self-announcing “JAY JAY” or an accusatory “Thief! Thief!” the bird making the noise is the Blue Jay. This noisy, active bird is often known for stealing and eating eggs and nestlings of other birds and pestering predators such as house cats, owls, and red-tailed hawks. Though sounding like a bully you might want to avoid, the Blue Jay is a little more nuanced.

Although they do steal cached food from other animals, Blue Jays pay it back by providing sentry services. A Blue Jay watching where birds and squirrels are hiding food will loudly announce the arrival of a predator, to the benefit of all.

Blue Jays eat a wide variety of foods, both plant and animal. An important fall and winter food is acorns. The birds hiding of acorns in the ground is a major factor in the spread of oak trees to new areas. More than other animals that eat acorns, Blue Jays tend to carry the acorns further, and bury them where they are more likely to grow, especially grasslands and burned areas.

This regal looking bird does very well around southeastern Michigan and the Metroparks. One more important thing to know about Blue Jays is that…They are not blue! Unlike other colors in birds that are created by pigment, such as red in a Cardinal, the blue in birds is made by the way light reflects off the feathers. Come see Blue Jays and some other birds that only look blue at your Metroparks.