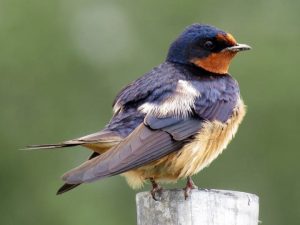 Barn Swallows are the most abundant swallow species in the world, and you can see them in Michigan during the late spring and summer months. You’ll find these agile flyers over open water, fields and meadows feeding on insects. Their speed and maneuverability while in flight is both graceful and awesome. Colors of cobalt blue and copper flash and glisten as these aerial acrobats easily move around each other, boardwalks, trees and even people! What sets Barn Swallows apart from other swallow species in Michigan is their long, deeply forked tailed. According to legend, it got its forked tail because it stole fire from the gods to bring to humans. The middle tail feathers were lost when an angry deity threw fire at it to punish the bird. During the mating season, check mud puddles as these birds use mud and plant material to make their cup shaped nests on man-made structures. Look for these birds during your next stroll through the Metroparks!