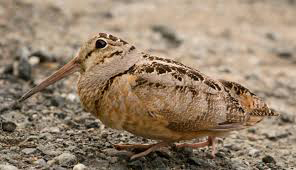 In early spring a small, round, shorebird begins to call. It’s a shorebird you will not find along a lake or river shore. The male American Woodcock chooses grassy clearings, such as fields and forest openings. At dawn and dust, you can venture to these special habitats to witness the aerial displays and calls, or “peents”, of these unique birds. At the beginning of the video, listen for the quiet chirping whistle that gets louder, then disappears. There is a short silence, until you hear the sharp “PEENT” of his call. The American woodcock begins his display with a slow-dance circle of “PEENT”s, then bursts into the air in a wide sweeping circle, flying up, up, up. They’ll get to a height of 250 – 300 feet. Then rapidly descend. As they are flying upward, you can hear a faint whistling, not coming from their beaks, but from the three most outer feathers in their wings. As they are descending, you can hear this whistling-chirping-like sound get louder, until you hear its wing beats as it lands on the ground. It will land in in the same area each time, allowing the most silent and respectful viewer to get a closer listen.

A large portion of an American Woodcocks diet consists of earthworms. They’ll rock back and forth on the ground, stimulating the earthworms to move, then probe the earth with their long bill to catch them. The lower third of their bill is flexible, where they can open it underground to catch the earthworms. The eyes of the American Woodcock are set far back on their head. As they are bent down, with their bills in the ground, their eyes can search for predators behind them. Their nostrils are close to the base of their bill and their ears are between their eyes and bill. A perfect ability to hear your prey in front of you and see predators behind you. An American woodcock is a well camouflaged bird, so they are easily overlooked. Enjoy an early morning or late evening walk while on a woodcock search to view this bird and witness their ever-impressive courtship display.