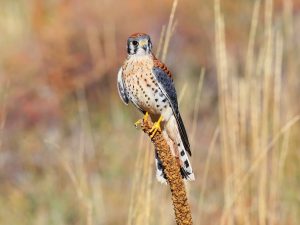 When most people think of birds of prey, they envision large, powerful raptors ruling over the skies. With the preconception planted firmly in our minds, when the American Kestrel enters the scene it is often mistaken as something much more demurer. Once commonly referred to as “Sparrow Hawks”, this nickname reflects their small stature as well as one of their favorite meal choices. These birds, however, aren’t hawks at all and are instead classified as a type of falcon. They are notable among other raptors for the fact that males and females have different colorings. Males have grey-blue wings and black bands on their faces with rusty patches covering their back and head, while the females have rust colored bands across their entire bodies and the same black bands as males on their faces. Kestrels are not picky eaters and are known to hunt insects, small birds, reptiles, and mammals. Among their favorites are House Sparrows and grasshoppers. While scanning for prey, kestrels have been known to hover in the air, much like a hummingbird. They are the only bird of prey to do this and manage the feat by flying directly into the wind at just the right speed. Referred to as “windhovering”, this is a very different tactic than what a hummingbird uses! Both parents play a role in raising their young, with the female watching the eggs or chicks while the male hunts for food. Rather than bring attention to the nest’s location, these diligent fathers will call to the female from nearby and she will fly to him to pick up her meal before returning to the nest. To catch these diminutive predators in action, visit any of your Metroparks!