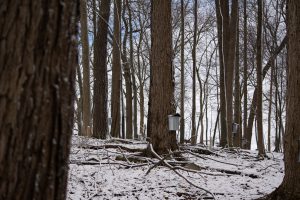 The month of March is upon us, and everyone will soon be keeping an eye out for the first robin and green spikes of daffodils poking through newly exposed soil (unless you’re a park interpreter – we’re watching for skunk cabbage and red-winged black birds, but they’re somewhat of a different story).   Even before these first beacons of spring, much subtler things are happening below the snow.  Temperatures are in fluctuation, and freezing night time temps followed by day time thaws are helping to get tree sap flowing, it’s their calisthenics before a big show.  To those in the know, this means it’s syrup time.

Most people have figured out maple syrup comes from maple trees, but why maple?  Why don’t we have pine syrup, or oak syrup, maybe a little hickory for that barbecue taste? Well, some places do! Alaskans celebrate birch syrup time instead of maple.  Sugar maple trees don’t survive as well that far north, so birch is the way to go. Birch syrup, does have a different flavor than maple syrup – more metallic, less sweet—it’s better suited for glazes and seasoning. Plus, because of a lower sugar content, it takes a lot more sap to make the syrup (100 gallons of sap for one gallon of birch syrup) – leading to a more expensive product.

The real reason maple syrup is the one we all know and love, is the higher concentration of sugar in the sap of maple trees compared to other trees. That’s particularly true in sugar maples.  This doesn’t mean the trees are oozing out syrup though, it still takes a 40:1 ratio of sap to syrup to get a finished product from a sugar maple tree. By the end, the syrup will be approximately 67% sugar, and the way we know it has reached that point is a science all on its own. 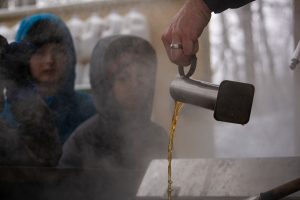 There are two methods to tell if your syrup is done. The first is by density and can be measured with a fun piece of equipment called a hydrometer. The old-school hydrometer looks a little bit like a very tall candlestick holder with a window down the side.  You must fill the holder with syrup and then drop a glass rod inside to see how far up the glass rod rises based on a gauge in the window.  Newer tools called refractometers, that look very similar to blood sugar meters, are able to do this digitally.

The other method is by boiling point.  The boiling point of water is lower than that of sugar. As you are in the last phase of boiling down your syrup, you can watch the temperatures rise in your pot.  Once you hit 219˚F, you’re at the magic point for syrup. And that, friends, is the sweet science of maple syrup!