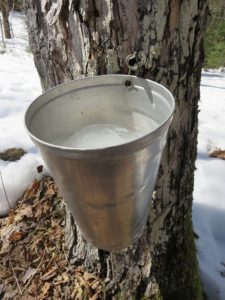 To me, maple sugaring is the first sweet taste of spring. Weeks before the snow melts and the first leaf buds, maple trees begin to shake off their winter dormancy. As winter ends, the cycle of night time freezing temperatures and daytime thawing temperatures triggers the maple’s sap to begin flowing. In Michigan, this usually occurs in late February or early March and continues for just six weeks, on average. This early season makes maple syrup the first harvest of the year for many farms. Once the weather remains above freezing at night, maple trees begin to bud, leaving the sap bitter and unsuitable for syrup.

Growing up on a small farm in Northern Michigan, I have many memories of collecting maple sap and boiling it down for the maple syrup that would flavor our Saturday pancakes for the next year. My father would slowly drive his tractor through the woods while my brother and I emptied sap buckets into 10 gallon milk cans loaded onto the back of the tractor. Some years, deep snows still lay in the woods, even as the air warmed above freezing and the sap began to flow.

The sap was taken to our farm’s syrup shack which was enveloped in a cloud of steam and wood smoke. Keeping the fires stoked, beneath the four foot by eight foot sap pan, was my grandfather’s job. The fires were kept burning night and day to boil away the excess water. This process helped transform the thin sap into sweet syrup. Once the majority of the water was boiled off, the thickened sap was taken to my grandmother’s kitchen where she would finish boiling it down in stock pots on the stove. It was then strained and canned, steaming hot, in glass jars. Row upon row of sealed jars, filled with beautiful dark amber syrup, would bring smiles to our faces and ensured that the next year would be full of pancakes covered in tasty goodness.

If this story has made your mouth water, consider trying it yourself! Anyone with interest, and a couple maple trees in their backyard, can make maple syrup. Wonder if your maples are big enough to tap? A maple at least 10-12 inches in diameter, at chest height, can support a tap. A single tap will yield approximately 10 gallons of sap, or about one quart of syrup after being boiled down. A simple ratio to remember is 40:1, 40 gallons of sap to make 1 gallon of syrup. A tap refers to the taphole, drilled 1.5 inches into the tree, and the spile. The spile is the hollow metal tube that is “tapped” into the taphole. It directs the sap from the tree into the sap bucket. For a backyard maple sugarer, the spile is the only specialty piece of equipment needed to produce maple syrup. The collected sap is ~2% sugar. To be considered maple syrup, the sap must be boiled down until the sugar concentration is 66%. You can check to see if your maple syrup is ready with a kitchen thermometer. Maple syrup boils at 219°F, 7 degrees above the boiling point of water.

If you have an interest in producing and tasting that first sweet taste of spring, come out to one of the maple sugaring programs offered by the Metroparks in March. Learn the history and technique of sugaring so that you can give it a try at home. You will join a proud tradition of maple sugaring that connects the early Native American peoples to the Great Lakes region today. Along the way, you will learn about the botanical wonders going on outside your door and will be left with beautiful, sweet amber syrup that will go perfectly with a steaming stack of pancakes.