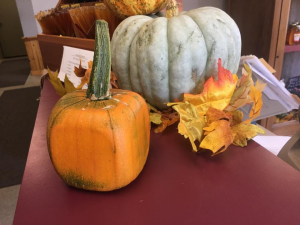 “Cucurbita pepo” perhaps one of the most recognizable yet one of the more misunderstood fruits of our culture. We commonly refer to them as pumpkins, and most people do little more with them than make the annual trek out to the pumpkin patch to carve and decorate them for our porches for Halloween.

Pumpkins are one of Americas oldest native crops. For Native Americans and early settlers, pumpkins were an important food source and crucial for survival during the bitter winter months because of their long “shelf life.” Pumpkins were a food source for both people and livestock and were much more than seasonal decorations.

Pumpkins have since evolved to become a decoration and tool for art. Most people have witnessed giant monster pumpkins grown with special and meticulous care by their growers. With the current world record at 2,624.6 pounds, pumpkin growers make up a hardy and unique segment of farmers.

Not only are pumpkins grown for numerous sizes, but specialty pumpkins are also grown to exaggerate common characteristics. Many people are surprised to find out that most pumpkins are not exclusively orange or particularly big. A wide variety of “pie” pumpkins possess thicker and sweeter rinds that make them better suited for cooking than carving. Other pumpkin varieties boast unique textures and multicolor combinations. Often confused with its cousin the gourd, pumpkins are limitless in their unique flair.

At the Kensington Metropark Farm Center, each year we pick a select few healthy pie pumpkins in our pumpkin patch and place them in plexiglass boxes as they are growing. Once they grow enough for their sides to touch the wall and meet resistance, they take the path of least resistance. By doing this, the pumpkins fill the box making a “square” pumpkin once it has ripened. We display our unique pumpkins as a testament of the pumpkins amazing resilience to grow despite the circumstances. Farmers have been enjoying playing with and exploring, the unique growing shapes for some time. I have seen farmers who place wire mesh on pumpkins and the pumpkin engulfs it and grows through it. Others have cleverly placed the smaller pumpkins in a tube or cut a two-liter pop bottle for the pumpkins to grow and fill the space. The only real restriction to growing uniquely shaped pumpkins is that the container must allow the sun to shine on the pumpkin. The reason for this is that the pumpkin cannot ripen and turn orange without sunlight. Without the sun the skin stays supple and soft which is great for farmers growing the next giant pumpkin but can cause a smaller pumpkin to rot faster and not develop a thick skin.

Next fall, visit your local pumpkin patch and see for yourself the varieties and versatility of locally grown pumpkins. Or better yet, grow your own pumpkins and see the magic unfold before you. It’s easy and fun to see what unique shapes you can come up with for your pumpkin carving experience next fall.