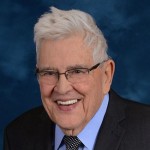 John (Jack) E. La Belle, 10-time chair of the Livingston County Board of Commissioners (member since January 1, 1969), was appointed to represent Livingston County on the HCMA Board for a six-year term ending May 15, 2015. He was first appointed on September 17, 2006, to fill the unfilled term of James Young.

La Belle retired after 38 years of service at the Ford Motor Company as the government sales manager in the Ford Fleet and Leasing Office. He graduated from Michigan State University with a bachelor’s degree in accounting. He is a graduate of St. Mary’s Mt. Clemens High School. He is a long-time supporter of the Metroparks and is committed to continued improvement of the Metroparks system and its availability to citizens in general.

His involvement in various levels of government service include:

La Belle, who has lived in four of the five counties in which the Huron-Clinton Metroparks are located, has been a resident of Brighton Township since 1965. He resides with his wife of more than 50 years, Beverly Strake La Belle. They have three adult children, Aimee, Richard and James, and eight grandchildren.