With keen eyes, a casual stroll down Kensington Metropark’s Aspen Trail sends you on a trip through time. Look for two tall, proud Cedars amidst a dense patch of Lily of the Valley. Flowers formed into tiny white bells, draped along a slender stalk, do you see them? Slip off onto the smaller trail and walk amongst these out of place plants, planted a century ago by Sophie Labadie, wife of famous Detroit labor leader Joseph Labadie.

Take a closer look. A crumbling stone fireplace enriches the scene, harkening back to a day when it served as a centerpiece of warmth, friendship, and freedom. This land holds many stories, but this is the story of Jo and Sophie Labadie. Almost thirty years before the founding of Kensington Metropark, this vivacious couple envisioned a recreational retreat for working class citizens. Friends and acquaintances were invited to use the property free of charge, so long as they took care and tended to its needs. They called it “Bubbling Waters”.

Bubbling Waters was the fulfillment of a pleasant dream we long had, to have a little place far enuf [sic] away from the noise and hurry-up of the big town, where people do not take the time to live like human beings…

Bubbling Waters began as a gift. In 1912, a family friend deeded Jo and Sophie 40 acres just north of the Ghost town of Kensington. Here, their summers were spent living off the land. Winters were spent back in the city, with Jo resuming his job. This homestead acted as an escape from harsh industrial city life. They built up the property with several structures, including a cabin, barn, henhouse, and den… complete with a printing press.

Originally a printer by trade, Joseph Labadie believed individuals had the right to speak, write, and publish opinions. And Jo Labadie had a lot to say. A self-schooled intellectual in a tumultuous time, Joseph Labadie placed himself at the forefront of the labor movement. While founding Detroit’s assembly of the Knights of Labor, he supported the Socialist Labor Party, the Greenback Party, the American Federation of Labor, the single-tax movement and the eight-hour work day movement. Fueled by libertarianism, anarchism, socialism, and romanticism, Joseph Labadie became a prominent Detroit figure. Sophie, his wife, acknowledged the significance of his work and preserved his publications, letters, newspapers, and journals. In 1911 at the age of 60, Jo donated his personal collection to the University of Michigan Archives. It is still housed there today.

Bubbling Waters has since faded into the background of Kensington, as nature has reclaimed the rural homestead. Yet, the spirit of Bubbling Waters lives on in the Metropark’s mission to provide excellent recreational and educational opportunities guided by the belief that the use of parks and exposure to natural environments enhances society’s health and quality of life. We invite you to come escape at the park, to visit this hidden architecture, and explore the area’s rich cultural past.

Want to learn more? Or to read literature that inspired Joseph Labadie? Check out this online exhibit created by the University of Michigan, using the Labadie Collection. https://www.lib.umich.edu/jo-labadie-his-gift-michigan/index.html

And here is a link to the archives, where you can explore primary sources from the Labadie Collection on your own! https://www.lib.umich.edu/labadie-collection 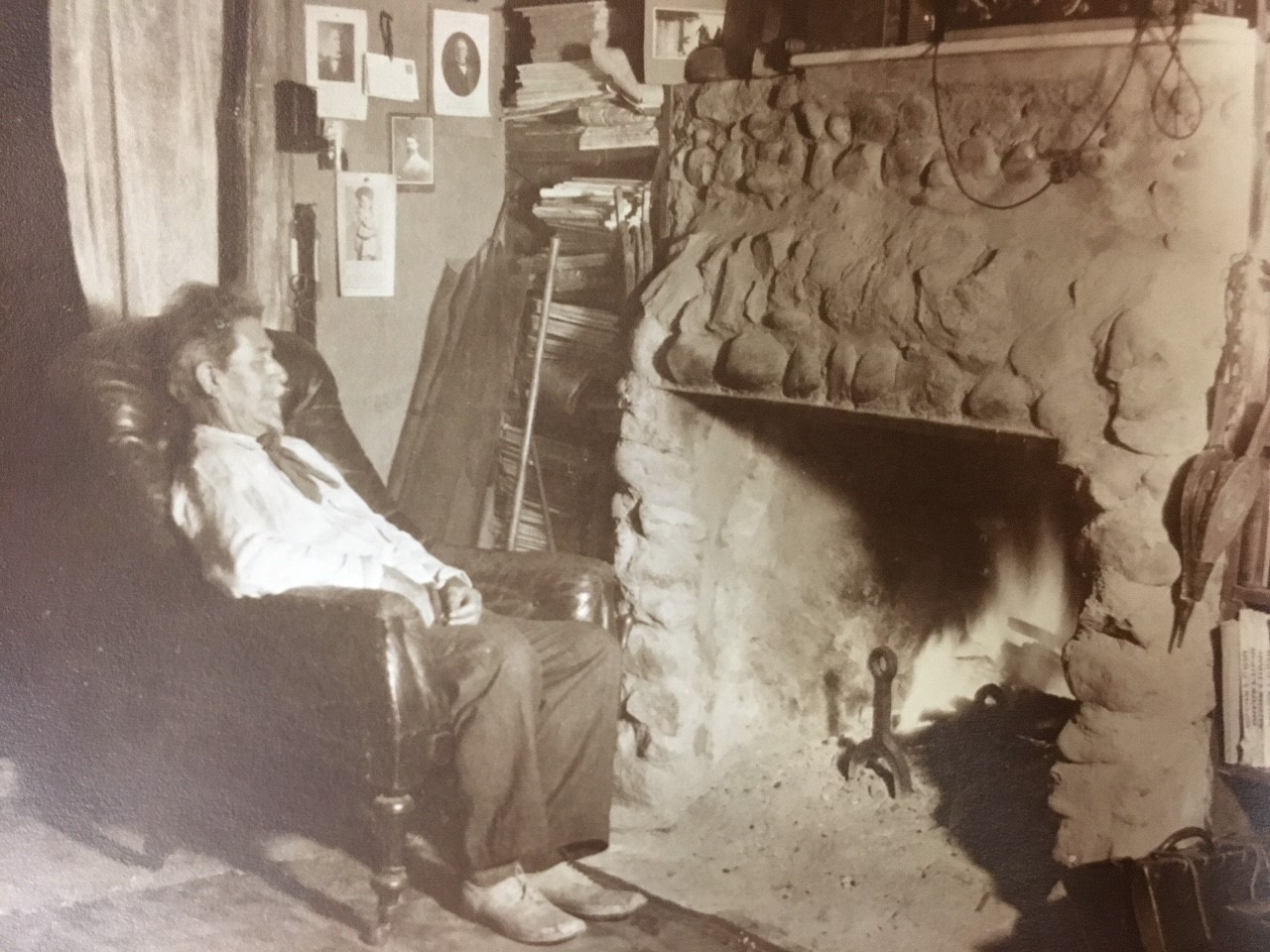 1925 Jo Labadie relaxing in the Den at Bubbling Waters. Remnants of the pictured fireplace can still be seen at Kensington Metropark in the Nature Study Area.